The layout of the pilot VPSA system is shown in Figure . It contains four main sections: 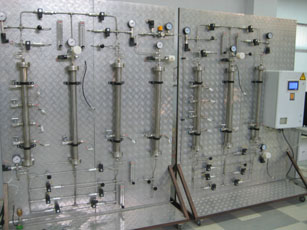 (a) The feed section is equipped with a compressor, a filtering and drying system  and a mass flow controllers.

(b) The VPSA columns have an inner diameter of 2.14 cm and a length of 75 cm. They were filled with approximately 1 litter adsorbent. Four thermocouples were installed at two of the four columns, to track the temperature front.

(c) The pressure regulation section consists of pressure transmitter, solenoid valves, a vacuum pump, and three gas container. The gas containers are used to provide enough gas for the A programmable logic controller (PLC) linked to a personal computer (PC) is used for the control of the unit and for the data monitoring.

(d) The analytical section includes a oxygen analyzer gas, in order to analyzing online the composition of mixture exiting the system.

The outputs of the controller instruments and the gas analyzer are connected through an appropriate interface to a PC. When the cyclic steady state is reached, the collected data are integrated to obtain product recovery, purity, etc.

The adsorption apparatus shown in Figure  is based on the static volumetric method. 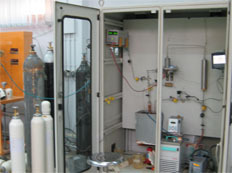 There is an adsorption cell and a loading cell. To minimize the dead volume as much as possible, 1/8 in. tubes and 1/8 in. valves are used. The adsorption cell, loading cell, and dead volumes are measured using helium gas. The total amount of gas introduced and recovered in the system is determined by appropriate pressure, temperature, and volume measurements. The temperature in each cell is measured by a K-type thermocouple operated with a precision of 0.01 K; the pressure is measured with a pressure  transducer. Temperatures and pressures were recorded at constant time intervals with a recorder (Logoscreen 50, Jumo). During measurement, the adsorption cell is immersed in a water bath (MC 12, Julabo Tech.) maintained at ( 0.02 K via a refrigeration circulator. Prior to each isotherm measurement, zeolite 5A particles are regenerated in an oven overnight (300 °C for 6 h) under a vacuum of less than 0.05 mbar.

The equilibrium solubility of CO2 apparatus is based on the static-synthetic method. In this method, a mass balance is used for calculating the amount of acid gas absorbed by the solvent. 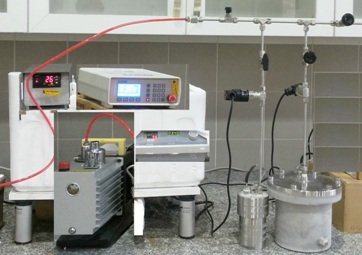 The acid gas quantity introduced in the equilibrium cell is determined based on the knowledge of the pressure–volume–temperature conditions.The apparatus contains gas reservoir, regulator, vapor−liquid equilibrium cell (VLE cell), buffer vessel, vacuum pump, pressure and temperature measuring instruments, and indicators. The VLE cell and buffer vessel were made up of 316 stainless steel with internal volume of approximately 360cm3 and 1470cm3 , respectively. The temperature in each cell was measured by calibrated K-type thermocouple operated within (0.01 K accuracy); the pressure was measured with a calibrated pressure transmitter (Model: PSCH0025BCIJ, Sensys Co). Temperatures and pressures were recorded at constant time intervals with a recorder (Model SL-45, ATRON Co). The both cell were situated in a water bath, and the temperature of the water bath was sustained the steady temperature with the precision of ±0.2 K. A magnetic stirrer (Model HS180, MTOPS Co) is used in the VLE cell at a speed of 350 rpm to attain the equilibrium condition faster.